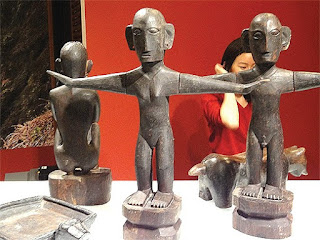 Antique Cordilleran tribal art and culture, best represented by Ifugao wooden sculptures, are on their debut international exhibition at the University Museum and Art Gallery at HKU. The exhibit will run until Feb 4 next year.

The 50 sculpture pieces, which date back to the 14th, 18th, 19th and 20th centuries, were brought to Hong Kong by Swiss lawyer and art collector Martin Kurer in cooperation with Asia Art:Future, a collector specializing in contemporary and antique Asian art.

The exhibition, “Ifugao Sculpture: Expressions in Philippine Cordillera Art”, is set up in an oblong hall of the gallery with a blown up panoramic sepia picture of the Banaue rice terraces by photographer At Maculangan as backdrop, giving visitors a feel of the natural locale where the carvings originated.

The exhibition, which museum director Dr Florian Knothe said was the first of its kind from the Philippines, was supported by the Philippine Consulate General.

Foreign Secretary Alan Peter Cayetano, who formally opened the rare exhibition on Nov 30, said in his opening remarks that cultural exchanges between the Philippines and Hong Kong strengthen the close relationship that already exists between them. 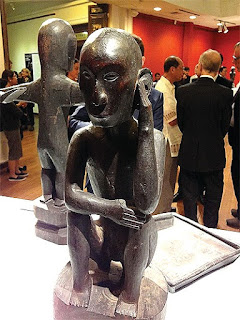 Cayetano expressed his gratitude to Kurer, who has made his home in Manila a gallery of Cordilleran tribal art and contemporary Asian art, and the Hong Kong art enthusiasts for making the exhibition a reality.

He related how he overheard one of those who helped set up the exhibition saying, “It took a Swiss guy to put up Ifugao fire at the world stage…no, he’s a Filipino na.”

Kurer said the trove of hardwood “bululs” or rice gods and ritual boxes carved by Ifugao, Bontoc and Kankaney artists centuries ago were simple but powerful expressions of tribal art. Carbon-dating showed one bulul was carved as early as the 14th century.

He said there was a movement in Italy, France and Germany at the beginning of the 18th century which captured the “raw power and simplicity” of tribal art.“The collection is our future, and this is the really remarkable part of it,” Kurer said, describing the artistic quality of the Cordillera tribal art as equal to that which influenced the 20th century and 21st century artists like Picasso and Brancusi.

Yet, he said those great painters could not have traveled to Africa and Oceania to pick up the influences of tribal art, but could have seen bulul sculptures brought by European souvenir hunters and art collectors.

Knothe, who also teaches at HKU, said the university gallery holds a dozen exhibitions every year that represent different cultures, like the Ifugao sculptures.

Speaking later to The SUN, Knothe said he was very impressed at the sculptures because each of the figures had a different expression on its face.

Vice Consul Bob Quintin, a Cordilleran who heads the cultural section of the Consulate, told The SUN he will invite groups to perform cultural activities such as tribal dances and seminars on the region’s culture that are related to the exhibition while it is running.

“Now that we have connections here, we are trying to do more,” Quintin said.